The Making Digital History project is particularly concerned with approaches to teaching history online that involve students in constructing things for themselves (including their own knowledge and understanding via more ‘traditional’ text-based approaches) in digital spaces and sharing the results of their endeavours beyond their tutors and peers.

I thought it would be interesting to gather some insights from colleagues who have developed expertise in this area. So, over the next few months, I’ll be releasing a series of ‘interviews’ with historians who have, in different ways, been asking students to ‘make’ history online. 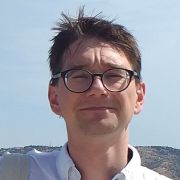 I was delighted that Dr Charles West, Reader in Medieval History at the University of Sheffield, agreed to be the first interviewee and must apologise that it’s taken me so long to get it online.

Charles has done a lot of work in engaging students with Wikipedia over the past few years. In the following interview, he discusses his approach, what the students have gotten out of it and what he’s learnt.

At the foot of this page, I’ll share a few additional resources for those of you who might be interested in trying this out for yourselves.

This module’s for MA students in the Department of History in Sheffield; it’s been running in different guises since 2018. The students are trained to edit Wikipedia, and we read and discuss some of the growing research literature about the encyclopedia. They make edits to a page of their own choosing, but preferably relating to the Middle Ages. And then they write an essay reflecting on their experience, and relating it back to some of the research literature. You can see last year’s module guide here which details the weekly readings.

My motives for setting up the module were threefold. I wanted to improve Wikipedia’s coverage of the Middle Ages, as public outreach as well as to support my own undergraduate students. Since they’re going to use it anyway, why not make it better for them, and for everyone else at the same time? Secondly, I wanted to give our students the opportunity to apply their specialist knowledge in an authentic, meaningful and grounded way. And finally, I wanted them to reflect on how the internet age is changing the conditions of knowledge production, distribution, and consumption.

This module is all about making and sharing with the entire world online, as well as reflecting on the process, and what it means for historians today. The students edit Wikipedia directly. Sometimes they create new pages from scratch (for instance on the Somniale Danielis, Bishop Adventius of Metz or Bernard the Pilgrim), but most often they work on pages that already exist (for instance the Battle of Tlatelolco or the Council of Hertford). So far the module has improved around twenty-five different pages, which between them have been read over three million times(!) since the module first ran. The students focus on their own individual pages, since I encourage them to link their edits to their own interests and expertise, relating to their undergrad or MA dissertations for instance. That doesn’t mean it’s not collaborative working, just that they are collaborating with other (anonymous) Wikipedia editors online rather than each other. Of course it’d be perfectly possible for the class to work jointly on a single page or set of pages. That would have some pay-offs. But it’d limit their capacity to reflect on the differences between their deep knowledge of a topic, acquired in an academic environment, and its representation on Wikipedia, the encyclopedia that anyone can edit.

And that is the main ‘learning outcome’ I’m looking for. That’s why the module assessment isn’t based on the Wikipedia pages the students have edited, but on a reflective essay. For me, it’s not enough just to feed the machine, and to assess how good students are at following the conventions for doing so. Ultimately I want them to think about the conceptual implications of a free, comprehensive online encyclopedia that to some extent ‘truths the internet’, from the perspective of an expert who’s personally contributed to it. Really this is a module about the function and transmission of different forms of historical knowledge in the twenty-first century.

There haven’t been as many challenges as you might imagine! I had to persuade my Department to let me run the module, which was the first of its kind in the University (and as far as I know the first in any UK History department), but that was pretty straightforward. We had to set up new marking criteria for reflective essay writing but again that wasn’t too hard, thanks to the generous help of colleagues.

Occasionally a student’s edits are reverted by protective or defensive Wikipedia editors. It’s a risk you run when working with a public page ‘in the wild’, which isn’t under anyone’s direct control. It can knock the student’s confidence. But I can reassure them that really this is just grist for the mill for their essay. That’s an added advantage of assessing not the page edits, but the reflections on them: it makes the assessment bullet-proof, so to speak.

The module has changed a fair bit over the years. In its first incarnation it was twin-track, teaching specific historical content (on the theme of medieval exemption, which I was working on at the time) alongside the Wikipedia component. The idea was that students would find some topic relating to medieval exemption, drawing on our seminar discussions, and then work on a related Wikipedia page. However, I found this structure unsatisfactory. It pulled the students in different directions, and didn’t allow them to use their own historical expertise freely. Ultimately I think modules like this need to have one focus, not two. So, having grown in confidence myself, I changed it to focus more squarely on Wikipedia and the wider digital turn. I still encourage the edits to be on a medieval topic, as a service to the field I work in, but it’s not really essential to the nature of the module any more.

Students like showing their friends and relatives (and perhaps future employers) that their work is being read by people across the world on a daily basis, being spoken aloud in people’s homes by Amazon’s Alexa, and indeed being consulted by other students in Sheffield and globally. That’s got an immediacy and real-world impact that artificial exercises or wikis in a VLE can’t match. Some students have become prolific Wikipedia editors in their spare time. A few finish the module more cynical about Wikipedia, and its role in underpinning the Silicon Valley knowledge economy. That’s fair enough: after all, as I point out, students enrolled on the module are adding value, in an infinitesimal way, to Google and Amazon, and they are even paying the university for the privilege of doing so! But it opens their eyes to a way the world works that they might not have considered before. By the end of the module, they are calling for more research on how academic history, public history and Wikipedia all intersect (happily colleagues such as Mike Horswell are on the case).

I enjoy teaching the course too. It’s great to see students acquiring new skills in digital literacy, which might open doors for them in future. It’s great to graduate a new generation of Wikipedia editors, public historians with the know-how and confidence to engage actively with this huge knowledge resource which, for all its flaws and compromises, is a powerful instrument for the democratisation of knowledge. And it’s satisfying to see pages on medieval history being updated at a scale that wouldn’t be practical for a lone researcher, helping to bridge some of the gaps between universities and the wider world, and helping to address some of the diversity problems in Wikipedia that scholars such as Victoria Leonard have identified. It’s fun to teach a module that’s also an ongoing public history project.

If you’re thinking about running a similar module, I’d say – go for it! For me, it works best at a postgraduate level, since I’m interested in the juxtaposition between a student’s existing historical expertise and the forms of knowledge represented by the encyclopedia, and that’s most straightforward when the students have already completed a History degree. That’s the place in the curriculum where my colleague Matt Graham ran it at Dundee, too. But Ed Roberts at Kent successfully integrated Wikipedia into his teaching with History undergraduates, just pitched a bit differently, and that’s something I’m weighing up doing too. Matt, Ed and I have all found Wikimedia UK to be invaluable allies and supporters, helpful beyond expectation. You’ll also find a wide range of advice and encouragement on Twitter. So I’d encourage you to take the Wikipedia plunge – I haven’t regretted it yet!

If you want to know more about using Wikipedia in your teaching, here are some useful links: